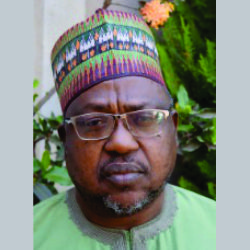 Dr Tahir Dahiru is a Medical Doctor with public health and clinical Dermatology backgrounds. He worked in a clinical setting in a busy Leprosy Hospital in Northern Nigeria for 16 years. During these years he was an on/off State Tuberculosis and Leprosy (TBL) control officer in former Kano State (Now Kano and Jigawa). He served as a part-time Medical Adviser to the Netherlands Leprosy Relief (NLR) providing Technical Support to 11 Leprosy and TB Hospitals supported by NLR for 9 years out of these 16 years, after which he then became a full time Medical Adviser to both Field and Hospital projects in the 13 Northern Nigerian States implementing TB and Leprosy projects. The Leprosy projects were funded by the NLR while the TB projects were initially funded by NLR in Bauchi, Gombe and Kaduna States. He participated in managing of TB grants from the Global Fund to Fight Aids, TB and Malaria (GFATM). He also participated in managing a TB reach project of active TB case finding among nomads.

Dr. Tahir anchored the community Dermatology pilot in Nigeria a project funded by NLR where Traditional Healers (TH) and Patent Medicine vendors (PMVs) were trained on how to use an algorithm to manage and or refer skin conditions. He served as Principal Investigator in a research project that identified the factors that affected the expansion and implementation of TB Directly Observed Therapy (DOT) in Kano State Nigeria funded by the State TBL program. Dr. Tahir participated in Training of Trainers (ToTs) that equipped him to be involved in many TB and Leprosy trainings, many of them were doctors joining Leprosy work in Nigeria both in the national TB and Leprosy training center Zaria and in the field. Besides this he trained many Local Government Supervisors on Leprosy and skin diseases. He was also involved in the training of Medical students on Leprosy postings.

He has lots of experience training front line service providers including training of General Health workers at PHC levels on Leprosy and TB. Training of traditional healers and Patent Medicine Vendors on Leprosy suspect and refer. He became acting country Director of NLR and then Executive Director of Leprosy and TB Relief Initiative Nigeria. In this capacity, he supervised and actively participated in the design and implementation of “NLR Legacy Project”. This was an innovative active Leprosy case finding using community members as community Leprosy workers who are involved in demand creation for Leprosy services and referring Leprosy suspects to centers where diagnosis is made.